Coming into 2016, I was watching more anime than I ever had before, and coming out of it, my anime hobby is definitely waning. Regardless, I watched a pretty decent handful of anime this year, and a lot of it I liked. So here’s a list of my 10 favorite!

To clarify, this is obviously purely my opinion, but I’d be happy to here yours, so feel free to comment! Also, there are a LOT of shows I missed this year that I heard great things about (particularly anime in the latter half of the year). So if they aren’t here, chances are that I don’t dislike them, but rather I haven’t gotten around to them yet.

Kicking it off is one of the most beautifully animated anime of the year. The first half of Erased made me think that it was at least going to be in the top three for sure, but after that, it just kept slipping. And slipping. And left me with one of the dumbest endings I’ve ever seen. Regardless of that, the first half was undeniably spectacular. The world sucked me in, the atmosphere was probably the year’s best, things felt concise, the characters, for the most part were pretty good, and everything felt right. Even if it’s the year’s most disappointing anime, the part I enjoyed, I enjoyed a lot.

KyoAni, despite being one of my favorite studios, does have a tendency to disappoint every once in a while, and unfortunately, this was the case for Myriad Colors Phantom World. But on the bright side, they didn’t disappoint too much. In fact, there still is a lot of fun to be had with this anime. The characters are all good (except for Ruri), the art is colorful and gorgeous (as KyoAni always is), and it’s actually pretty funny a lot of the time. I’d even be in for a second season. Just don’t expect anything like Eupho…

Despite the fact that I still have 3 episodes to go, New Game! has to be on the list. Honestly, I haven’t seen this much effort put into a moe anime’s visuals since Yuru Yuri’s second season. And on top of looking amazing, each episode is a lot of fun, never failing to make a work day look like ridiculous fun and setting up staggeringly high expectations for the future working class that’ll never be met. Also, it’s no surprise that the show centers around character designers, because everyone in New Game! is unbearably adorable. Like, really adorable. What the hell. 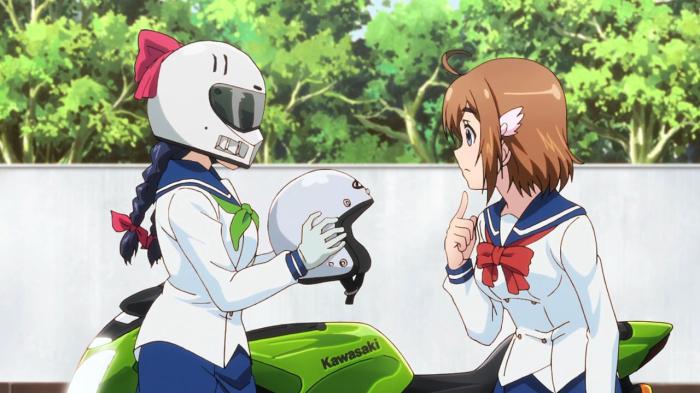 I think there’s going to be an anime based around cute girls being inexplicably obsessed with everything eventually, and this time around, Bakuon!! covers cute anime girls being inexplicably obsessed with motorcycles. Yes, it is as stupid as it sounds. But luckily for me, there are a lot of cases in which I love stupid anime, and Bakuon is one of my favorite stupid anime. Honestly, this is placed a lot higher on the list than it deserves to be, but hey, it’s my list. Too bad there probably won’t be a second season though.

Boy, do I love Trigger. I wish I could see more from Trigger. They’re always exploding with a ridiculous amount of originality and creativity. This spring season was a great one for them, as they had two very popular shows airing at the same time. One of these was Space Patrol Luluco, easily the most creative and crazy show this year. It was fast, cute, fun, had beautiful art, hilarious (like, genuinely hilarious, had me laughing a LOT), and even packed in a sentimental message about first love. Shorts allow for so much freedom and creativity and never get the attention that they deserve. If you skipped over Luluco, you owe it to yourself to give it a watch. You won’t regret it.

KonoSuba was just a fun anime. It creatively played off of the “chosen one” trope to deliver heavily flawed characters that, instead of living in lavish homes and had a lot of admirers, were selfish people who lived in poverty and drank every night. But despite being technically “bad” people, the whole main cast is likable. And so is basically every other facet of the show. And hey, the second season s going to start airing real soon, so be sure to watch that. I know I will.

I didn’t know how popular Kiznaiver was until I saw a girl with a Kiznaiver shirt in a mall one time. That made me happy because great anime deserve to be recognized, and it’s a great thing that people were looking out for this one. Luluco was really good, but Trigger managed to one-up themselves with their full-length anime this spring. It had great characters, well-executed drama, good humor, and an anime love triangle. I’m a sucker for that shit.

I’m really looking forward to whatever Trigger is doing next, because damn, they’re on a roll right now. (oh and Sonozaki = best girl)

Apparently, nobody liked this anime nearly as much as I did. But Tonkatsu DJ Agetarou is wacky, colorful, fun, and brilliant. I don’t see why anyone would hate it. It’s soooo much fun.

I think I personally could take a lot away from it because I’m a huge music nerd and love DJing, so seeing it in an anime that was totally my sense of humor and my vibe was amazing. Can’t wait to go back and watch it again.

Showa Genroku Rakugo Shinju was the most refreshing anime this year. It’s very mature, very adult. The writing strays far from anything we normally see in anime, delivering a story that wouldn’t be too far from something like Breaking Bad. In fact, I think it would be easy for somebody who never watches anime at all to fall in love with this show. It’s packed with drama, emotion, deep characters, and fantastic writing. To be honest, I think that anime can struggle to pull off serious story lines without coming off as immature a lot of the time, but that is far from the case with Showa Genroku Rakugo Shinju. I can not wait for season two.

Sure, this started airing last year, but it ended this year, so I’m gonna let it on the list anyway. Osomatsu-san is just crazy fun. Unapologetically immature and funny, creative, and a lot of other things. It was a surprisingly big hit with not only me, but a lot of other people it seems. Especially girls. That surprised me, but I’m really happy to see that demographic have a strong representation outside of shoujo (in fact, now that I think about it, women had a huge part of anime in 2016, but that’s another piece). With it’s popularity and originality, there better be a second season. Like seriously, please make it happen.

Well, that’s my list. 2016 was crazy, and I’m pretty happy to see it on it’s way out, but I did have some pretty big high-points personally. I changed a lot this year, and one of the things that’s changing is my love for anime. Anime seems to be a hobby I’m paying less and less attention to, and while that sort of upsets me, I’m not going to fight it if I naturally become uninterested in it. It’s at least been fun while it lasted. Anyway, we’ll see where that goes. Here’s to hoping everyone has a fantastic 2017!

idk brother View all posts by Me

Other Pages and Fun Stuff